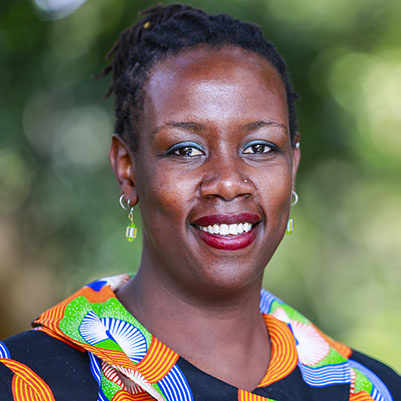 Director of African Women in Agriculture and Research Development

Dr. Wanjiru Kamau-Rutenberg is the Director of African Women in Agricultural Research & Development (AWARD). By strengthening the ability of African agricultural researchers, institutions, & agribusinesses to conduct and disseminate gender responsive agricultural innovation, AWARD is working towards more inclusive, agriculture-driven prosperity for the continent.

Dr. Kamau-Rutenberg has been honored as a Champion of Change by the Obama White House, named one of the 100 Most Influential Africans by New African magazine, recognised as a Ford Foundation Champion of Democracy, awarded a United Nations Intercultural Innovation Award, & named one of Kenya’s Top 40 Women Under Age 40.

Born in Kenya, Dr. Kamau-Rutenberg holds a PhD & Masters degree in Political Science from the University of Minnesota as well as a Bachelors in Politics and a Doctorate of Humane Letters (Honoris Causa) from Whitman College.

She is a member of the Malabo-Montpellier Panel, a high-level panel of independent experts supporting African governments and civil society identify and implement policies that enhance agriculture, food and nutrition security. She also sits on the Board of Twaweza, East Africa’s largest public and policy engagement platform, and the African Democratic Institute.

Prior to AWARD, Dr. Kamau-Rutenberg founded and was Executive Director of Akili Dada, an award-winning leadership incubator that invests in high-achieving young women from under-resourced families, who are passionate about driving change in their communities.

Dr. Kamau-Rutenberg was also an assistant professor of Politics at the University of San Francisco & a lecturer in International Relations at the Jesuit Hekima College, a constituent college of the Catholic University of Eastern Africa. Her academic research and teaching interests centered on African politics, gender, international relations, ethnicity, and democratization, and the role of technology in social activism.