“It gives me great joy to stand as a woman, not begging, but helping others and playing a role in changing the world in which I live.” 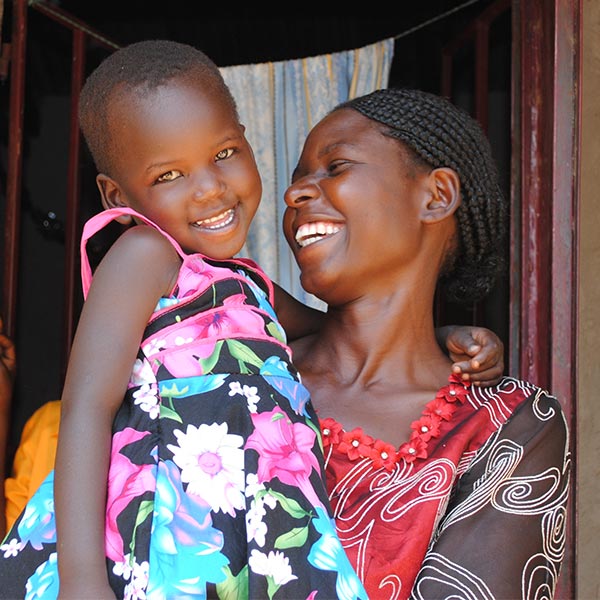 One stitch at a time, a Ugandan tailor helps mend the gaping education hole through which she and thousands of Ugandan girls and women have fallen.

As a child, Angela Adeke and her two sisters were not able to go to school because their parents were desperately poor. “Just getting the basics in life was very difficult. Our mother brewed alcohol to feed the family. We didn’t have to be told how poor our family was. It was all over us. We were the talk of the village because we begged for everything.”

Like Angela, thousands of Uganda’s girls are either not stepping foot in a school, or dropping out at record rates. Uganda has the highest drop-out rate in East Africa according to UNESCO.

About 80 percent of rural Ugandan girls leave school too early, often after becoming pregnant after forced or coerced sex. Uganda also has one of the highest teenage pregnancy rates in East Africa.

In Angela’s district, Ngora, schools are overcrowded and still recovering from attacks by guerilla leader Joseph Kony’s LRA rebels in 2003. The guerillas destroyed homes and schools, and families were split apart and forced into IDP camps, further setting back girls’ education.

“Children in Ngora District lived in fear and panic and schools had to be closed for some time because in other districts the rebels abducted girls from school,” Angela recalls.

Angela’s on fire to reverse these dismal trends in her country and for her three-year-old daughter, Grace. When you hear Angela’s story you can believe she could do anything on which she sets her mind and heart.

After being harshly shunned by a school when she couldn’t afford uniforms for her own children, Angela got galvanized. And she grabbed the chance to get life-changing business training and a small $150 grant to buy cloth for her tailoring business from Village Enterprise.

Angela went on to invest in sewing machines and proudly sewed her sons’ school uniforms. They’re now in good schools. Then, in a success story that reads like the plot of a Hollywood movie, Adeke went on to sew uniforms for 4,000 other children at several schools in Ngora, one of Uganda’s poorest districts.

Angela has also helped train at least 10 young pregnant women, who were stigmatized, banned from attending school, and often abandoned by their parents. “These girls were at home with nothing to do and no support, and so I trained them to become tailors…It makes me feel good to help others.”

Angela’s business is promising as Uganda works hard to get children into school after decades of neglect and high illiteracy. Some classrooms in her district have up to 120 students, so uniforms are in high demand. “One school has been my client for five years. Because of my training, I’m able to use good business language to keep my clients, apply my skills in keeping records, and make informed decisions,” she said.

Angela’s rise as one of the rare, female business leaders in patriarchal Uganda is admirable, considering that 75 percent of trade businesses are dominated by male employees, according to the Women and Girls Empowerment Project. She inspires girls in her community who see her example as a leader. She is determined that her three-year-old daughter will have more opportunities than she did.

“It gives me great joy to stand as a woman, not begging, but helping others and playing a role in changing the world in which I live,” Angela said.