“Other groups are now approaching me for advice.” 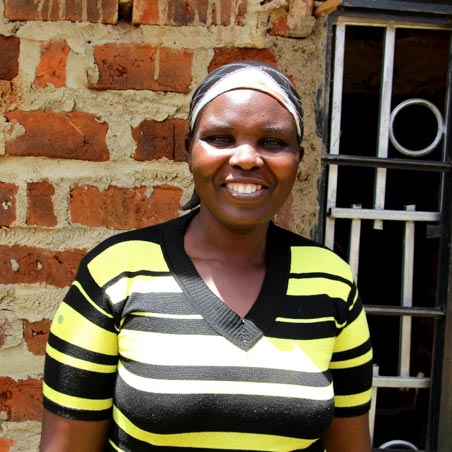 A window in Bibian Musunjaji clay compound perfectly frames the half-built red brick building that stands in contrast to the rolling green hills in the backdrop.

Bibian is a 48-year-old mother of six. She lives in the rural village of Chukura, Kenya.

Prior to joining Village Enterprise, Bibian did everything in her power to support her family. With limited employment options, Bibian depended on seasonal labor and casual jobs on large neighboring farms to provide her family’s next meal. Such labor is physically exhausting – “I used to dig holes in the sun for hours” – and results in very little pay.

Bibian struggled to keep her children in school. “Some weeks they could go, some weeks they couldn’t,” she said. Although primary education in Kenya is technically free, many public schools require fees to support teachers as well as for uniforms and school supplies. During the weeks when Bibian could not afford their school fees, her children were sent home and performed side jobs to contribute extra income to the household.

The person Bibian described, however, is not the confident, capable woman she is today. Bibian speaks eloquently as her hands swoop gracefully with each sentence. Business Mentor Felix Tiony identified Bibian, along with 30 other individuals in Chukura, to participate in the Village Enterprise program in November 2013. After receiving training and the start-up grant, Bibian and her partners started a business that included two components: sheep-rearing and brick-building.

Bibian rounds the corner of her compound to show off a giant pit in the ground. From this deep pit, Bibian extracts the red clay that she uses to form rectangular bricks. She points to a pile of completed bricks that sat drying in the heat of the sun. It is these very bricks that serve as both the foundation for her business as well as the literal foundation of the new home she is building for her family.

Bibian has not only seen success with her business. During the formation of the Business Savings Group, Bibian was elected the Chairperson by the other business owners. Bibian repeatedly emphasizes how her experience as Chairperson of the BSG has helped her to develop both administrative and leadership skills. “I have learned a lot. I write the minutes at every meeting and create the constitutions.” In fact, she continued, “Other groups are now approaching me for advice.”

The Business Savings Group has also played a fundamental role in allowing Bibian to expand her business, both through the ability to take out loans as well as through the division of interest payments amongst all members. She explained that, “Through the BSG, I now understand how to borrow funds with an intention. My reasoning has changed.” Bibian lists how she used each cut of the interest payments she received: “I first got more bricks to sell. Then, I paid my children’s school fees. Now, I am buying more bricks to complete my house.”

Brick by brick, day by day, Bibian is building a better future for herself, her family and her community.