“I used to sit around waiting for government relief... I never dreamed of starting something. Now I have the knowledge to start any kind of business.” 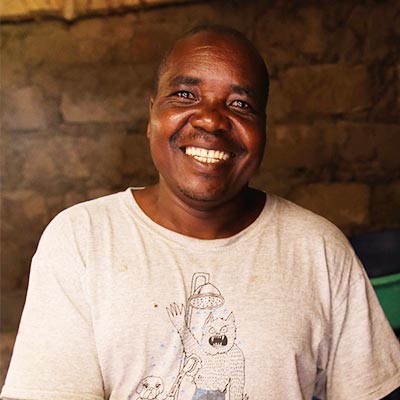 Joseph Ebwalu is a proud father of eight children who lives in the rural village of Maaga, Uganda. Before becoming a Village Enterprise participant, Joseph engaged in subsistence farming, producing just enough cassava, millet and ground nuts to feed his family. Occasionally, a cup or two remained that he could sell in town for a small profit. But Joseph never qualified to take out loans, which prevented him from building a business that could produce a sustainable income for him and his family.

Joseph’s life took a turn after qualifying for the Village Enterprise program. He began learning about the importance of savings as well as other financial tools in his trainings. After receiving the initial grant from Village Enterprise, Joseph started a business rearing goats with his fellow group members. Before long, three goats became twelve.

With his profits, Joseph is able to feed his family three meals per day and send all of his children to school. His oldest daughter is now in boarding school, and will soon be taking high school entrance exams. On top of that, Joseph has purchased five acres of land and plans to build in the town center and in the village.

The changes in Joseph’s life have had a ripple effect in his community. “Everyone has seen so many changes that now they ask me for advice,” he said. One of Joseph’s neighbors used to drink heavily and sell alcohol, causing problems at home and in the community. After explaining what he had learned through Village Enterprise, Joseph invited this neighbor to become his business partner. The duo began commuting to the town center to buy green grams (mung beans) and sour gum on market days, returning back to the village in the evening to sell their goods. Joseph’s neighbor has not only stopped selling alcohol, but has also abandoned drinking himself.

Joseph still faces challenges. He is nervous about the impact of the upcoming presidential elections. He worries that drought may reduce the amount of produce he can sell. Despite his ability to afford medical treatment for his mother, she still passed away from illness.

Still, Joseph remains hopeful. “God has brought the Village Enterprise program here. I used to sit around waiting for government relief…I never dreamed of starting something. Now I have the knowledge to start any kind of business.”